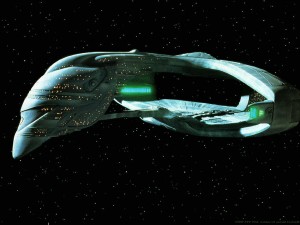 The Warbird is one of my favorites.I’ve designed this figure in octobre 2012, but the idea to make this I had several years ago as I tried to find one in the internet. There was nothing no image no diagram. Last time I ve checked the internet I found one but barely recognizable as warbird it was somewhere on the beckground and looked rather kneaded than folded. So I began to consider how to fold the Warbird. As with most of my figures, I chose here the bird-base. But this base appears to be a problem. The problem lay in the symmetry of the bird-base. It is a problem, because in this case, all four lobes of the base figure are equal. For three of them it is equality not a problem. From one I would shape the nose, from two others downwardly curved wing with integrated nacelles, which can then find the bottom of the stomach together. The fourth flap should then be moved to the back, make a curve down, and arrive at the connection of the wings and the best so that there is enough paper to bind the wings. So the flap for the back part should be longer than any other.

I’ve tried different ways to solve this problem. I took other basic shapes in the paper, such as dragon or lozenge instead of square. But I allways quickly discarded these approaches. I did it because I was dissatisfied with the result and it was against my own established rules for me (like the classic origami from a square). Also grew in me inner conviction, it has to be possible to tinker that figure out from a square. I just needed a brilliant idea and as long as I did not have this, I froze the work on this project for several years.

The idea came suddenly. I experimented with different basic shapes, folded after guidance figures. And one day  as I tried to fold a Hydralisks, a character from the PC game “StarCraft”, I’ve noticed an interesting move. At the beginning each side of the square was reduced by 1/4 on two adjacent sides by folding of 1/4 of them inside to the middle. As a side effect from the corner formed by the two sides we got a further preliminary base in size 1/4 x 1/4 of the original page. That was the idea that I needed. If the base paper is large enough (at least 20cm × 20cm – A4, better 35cm × 35cm – A3), then I the rest square with side length of 3/4 of the base size offers still enough material for the fuselage wing and nose. And from the 1/4 preliminary base I cane shape a half bird-base and an extension of the fourth tab.

The first version I have razed at breakfast from a till receipt. The nose and fuselage have not the desired shape, but the main wings, rump and connection of the three worked well. 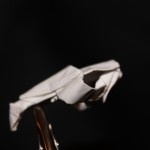 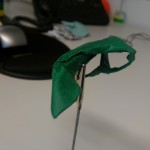 And after some experiments a second one 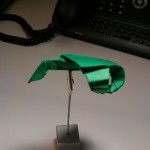 Later I tried it a regular printer paper in DINA A4 and A3 sizes.