The idea to fold these classes of strarship came to me as I worked on the U.S.S. Kelvin. Both ships have equal configuration to each other and are very similar to the Kelvin. The difference between both ships is their classification made due to their aim of actions. The Saladin class is a frigate while the Hermes class is a scout. So the Saladin class disposes of heavy arms than Hermes. But those differences are very tiny details to be shown in an origamy model of size I usualy make.

After I have accomplished my first model of the U.S.S. Kelvin I’ve decided to create the Saladin class. The model should be much simple than Kelvin finally it dispose of one nacelle only. I started this model from the fish base, shaped the dishsection and the nacelle and then… Then I had so much paper left tat I had no Idea how effective to hide it. It took another three or four month to find proper solution but finally I’ve created a considerable version of this ship, that I want to share with you. 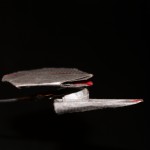 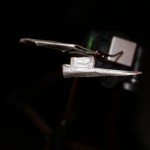 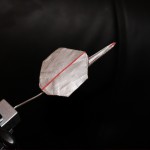