The Idea to fold an romulan bird of prey came after I had already developed several federation ships. One day I came across one TOS episode where the romulan were first time shown. I saw the romulan ship. It was round almost circular, had two nacelles, whose columns were inclined a little toward. It was actually a very simple form and I’ve decided to fold the model. Also for this model I chose the bird-base as the underlying base figure. I choose this base often. On the one hand have Romulan and Klingon Birds of Prey, and the Warbird the “Bird” in its name, on the other hand they are all not only by name somehow flying birds.

The first version I was pleased with allowed identification of the ship but contained too few details. But this sircumstance does not bothered me till I saw the version designed by Andrew Pang. It had this unmistakable, though not clearly attached to what purpose, stab on the upper side of the saucer.

As you can easy recognize these details have not succeeded very well. So concentrate my self on the stab. It took several attempts before I was satisfied with the ship.

Later I have learned that the model that has animated me to improve mine was made not from a square but from a triangle. From which we can deduce the following: the water bomb base buid a triangle, which means that if we choose the water bomb as a base and find suitable flat steps to re-create the model of “Papaer Universe” from one triangle of the waterbomb base, we wuld have still another triangle to shape some details.

What am I waiting for and why? I had not btained this book by now and my be never will. I simply can not spend 185,-€ for “Paper Universe”. Maybe I’ll get this book eventually one day as gift, but… Anyway, I turned around Christmas and New Year 2012/2013 back to my model, and decided to create missing bridge. During developing process of the original model, I used a lot of time to hide “excess” paper. Now it was no longer necessary. Nevertheless I went this time carefully and here is the result. 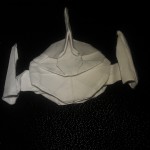 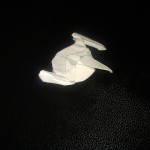 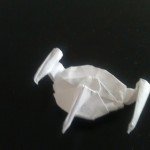 Of course, these are the images of a prototype, which I folded over lunch from a tiny sales slip. Larger models of real origami paper will follow. And as I just realized I have to turn around the triangle of the tail. but this will be a separate work. 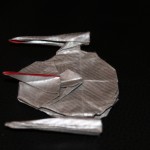 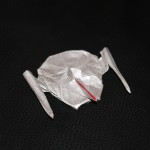 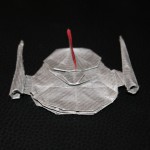