The second ship I have developed was the USS Reliant (Miranda Class). The development of this model I have began in fall 2008. Without a concrete goal in mind I’ve  just started to fold. A less concrete goal I had indeed. After the creation of the Bird of Prey I wanted an opponent for him. This should be a federation ship. And so, without knowing what it will be in fact, I began to investigate. The only detail that I had clear in mind was that the ship must have a saucer section.

As with the Bird of Prey, I chose for my next ship, the bird-base as base figure. My first Idea was thanks to the stretched plats of the bird-base to shape a Voyager or Enterprise-D or E, which I then later succeeded. But however at this time it should not succeed. In purpose to shape the engineering section and the deflector dish I’ve folded half of one plat inside. Suddenly I saw that I was not that far away from a completely semi-circular saucer. That was just as much curved, as it has to be found in the Miranda class. From now on, my goal was to become concrete, I wanted the Reliant. After several attempts I had something that came very close to the Reliant or at least was clearly identified as such by the Star Trek fans. 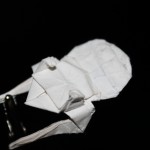 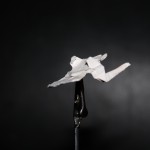 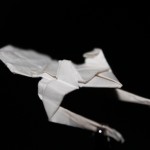 Although I knew that the Miranda class has at the rear a connecting bridge  across the ship and my model only two short outgrowths, nonetheless I held my model due to its high recognition value for quite well done. Until 2012 I came across the Soyuz class star ship. I’ve suddenly realized that the only thing that differentiates these two vessels is the connecting bridge of Miranda class and a turret at the same place at the Soyuz class. From this point my Reliant was not good enough. It had to become better. After some experiments I’ve got finally the solution. 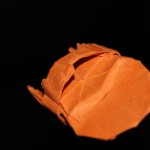 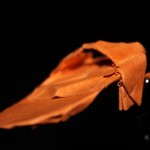 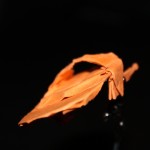 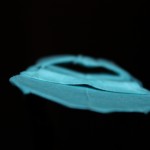 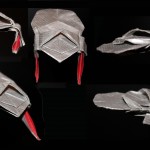