One evening I took a walk with my dog, trying to perfect the folding technique for the Defiant. I focused here on the round part where the bridge is located. I wanted to round it and  get more symmetrical. I left both lobes of which I form the nose and the back of the ship down resp. back and formed the “saucer”. When I was done, I saw avery familiar  shape. The Oberth class comes in the Star Trek series not often, but I knew this ship configuration. I knew it through the game “Birth of Federation

Soon after that, I tried to model the Oberth class. Even the first version I had managed well. I was very pleased with myself, until I had checked the internet and saw what I was missing. The first version had the saucer section, which sat on a short, shallow hull, two nacelles, but it completely missed the lower part, which looks like a float. At closer inspection, I saw that it will be impossible for me probably from this ship from one piece of paper, because this canoe-shaped part is connected by two strutting to the sides with the rest of the ship.And there is no connection between both parts in the middle.

After careful consideration and some trials to fold the ship at least schematically from one piece of paper, I saw I would make this model consists of two parts. However, I discovered that both parts have to be folded from different sized squares. It took about another two or three months how to achieve the right proportions, but finally I had. 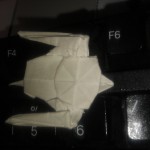 The second version  came pretty close to the original image, but the connection between two parts of the model was very unstable. And so I continued my experiments  with this model. I changed tha basic shape for the bottum part from fish to the bird base. The connection pins became longer and I was able now to fold both part of two equal squares. 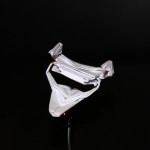 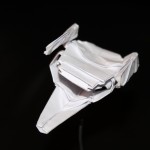 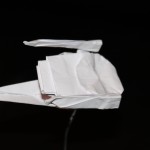 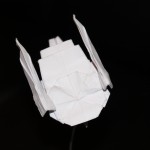